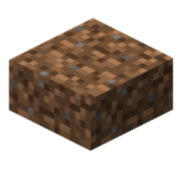 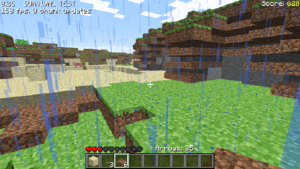 The Dirt Slabs, replacing all the Dirt (not Grass) blocks.

마인크래프트 서바이벌 테스트 버전에서 흙 반 블록이 사용된 모습이다. Notch did a test with dirt slabs, although they were never officially added. In the test they replaced dirt blocks, so that dirt surface without grass was half a block lower than grass. However it made a mess of the sides of cliffs and underground.

Studded armor existed as a series of sprites in the Indev 0.31 items.png file, between leather and chainmail armor, and in place of gold/diamond armor.

The unused potions can be seen in the inventory GUI files but some effects are not present. However, in 1.4.2 the custom potions feature was introduced. It is the only way to access the unused potion effects.

These potion effects with a ~ after them can be obtained through the custom potion feature along with the /effect command.

A more detailed list can be found at Potions. 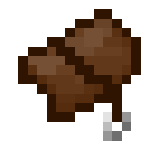 The horse saddle icon used in the inventory.

Horse saddles were items that were added along with horses that worked just like regular saddles, but for horses instead of pigs. These saddles used a texture similar to the one in the Mo' Creatures mod, which has a dark brown color rather than the burnt orange of the existing saddle. The horse saddle was craftable during the time.

Horse saddle items were later removed from the game, and the same saddles (found in dungeons) are now used for both pigs and horses.

Cameras were entities that were able to be found in Pocket Edition's files. It had bugs when placed or used, such as having an incorrect texture which was that of a music disc, obscuring pictures with smoke particles, taking the picture in back view mode and disappearing upon being placed. Johan announced at Minecon 2012 that the camera may be added in the future, possibly with an easier way to take pictures and share them with other players.[4] It was removed as of version 0.9.0. However, it has been hinted that it could return in the future.[5]

In the Pocket Edition texture file, next to the original camera texture, is a texture for what appears to be a handheld camera.

The Sky Dimension or Skylands was a planned dimension, intended to be added in Beta 1.8 or Minecraft 1.0. It could be accessed using hacks or mods but portals to the Sky Dimension were never implemented. The idea was ultimately scrapped[출처 필요] and its code was reused to make the End. When in the End, the debug info displays the word "Sky" as the current biome name (This is no longer the case as of 14w17a).

Loops were unused sounds, found in the game files, and were possibly meant for when the player is in a specific type of location (i.e., in caves, woods, the ocean and beside a waterfall).

They were found in .minecraft/resources/sound/loops/, and could be converted to reveal four loops, of birds chirping, cave chimes, ocean and waterfall noises.

Calm4.ogg was a music file (alongside the other tracks) that was beta-tested and created by Notch himself.

It consists of an up-beat, battle-like tune. A part of the song has Notch saying "Mojang Specifications" in a slowed-down voice.

The track was released around Alpha 1.1.1 (Seecret Saturday 10), but it is unknown when and why it was omitted from the downloaded game files. As such, players who had the game while the song was still in it will continue to hear it being played, as the game will play any song in the .minecraft/resources/music folder.

An unclickable Play Tutorial Level button was added during Indev. It could be found on the main screen. It was finally removed during the transition from Alpha to Beta stage, but no such tutorial level existed between Indev and Beta.

The tutorial level was finally added in the console versions of Minecraft.

These features were planned at one point but later abandoned or their current status is unknown.

Notch mentioned adding branches in a blog post during Indev. The addition of sideways logs seems to be an alternative for branches.[6]

Notch attempted to implement coral, but he stated: "But it's really hard to draw a single block that looks like corals, since it's really more about crazy amounts of variation and diversity. But I do know that the corals will have tiny fish particles around them."[7]

In Indev's terrain.png were two textures which might be interpreted as a chair (side and front). The actual purpose of those textures is unknown. The 2nd texture might be the side view of a table. On Word of Notch, furniture, and more specifically chairs, is mentioned a few times.[8][9][10][11]

Spike Blocks were originally planned for Beta 1.7, working by extending and retracting spikes (and making them more "spike pistons" than anything), but were replaced by Sticky Pistons. On May 28, 2012, Dinnerbone stated that he'd like to add spike blocks, but is unsure of how to implement them.[12]

Purple arrows were shot by Skeletons in Survival Test and acted the same as regular Arrows, but the texture is not currently in use.

Although the sprite for a quiver has been in the game since Indev, almost nothing is known about it. Jeb has stated that he is not going to add them.[13] Later, during 1.9 development, Dinnerbone tweeted a 2×204960 image[14] which can be reformed into a 854×480 Minecraft screenshot, containing the quiver.[15] On June 30, 2015, Dinnerbone posted that he removed them again as arrows in the off-hand feel "more natural".[16]

In 1.9, the quiver texture was removed.

Quivers are obtainable in the Pocket Edition using hacks. However, these quivers do nothing but freeze the game when used as they are an "empty" item using the quiver texture.

Dinnerbone asked Twitter how they would feel about colored planks.[17] He announced the results as being, "30% 'please no', 80% 'yes please'. Yes, that's 110%. I don't even know."[18] Despite this, he cancelled the idea and instead added hardened clay, which can be dyed. The dyed planks were abandoned after Dinnerbone realized they would require slabs and stairs of each color too. However, each tree type has their own color plank. This includes stairs and slabs, (and doors and fence in 1.8) but not buttons or pressure plates. However, they are not dyed, just simply the color of the appropriate tree.

Mojang tweeted images of this during the development of the Redstone Update but did not subsequently release it in the update.[19]

BUD switch was a block that was possibly planned to be added in the Redstone Update that would act as a Block update detector, told at Minecon 2012 for use with redstone circuitry, but still was not added.

Whales were mobs mentioned by Notch in a version of Alpha as a water mob, until the addition of Squid.[출처 필요]

Notch revealed during the 8th Seecret Friday Update that he would add dragons, one being the Ender Dragon, the other being red tamable dragons.[20] Jeb informed participants of his AMA on Reddit that he would add red dragons, but was unsure exactly how.[21] The Red Dragon has not subsequently been added.

On October 22, 2013, Dinnerbone tweeted that the Red Dragon is "shelved" and not in development.

Later, on December 15, 2013, Dinnerbone wrote on Reddit that there will be red dragons in Minecraft one day.

Capture the flag has been mentioned a lot by Notch and is currently unimplemented, but it was also stated at MineCon that it will come on the console versions before the PC. Dinnerbone said on Reddit he might add flags so Capture the Flag might be in a near update. Plugins and mods have been created to simulate Capture the Flag[출처 필요]. As of the 14w30a snapshot, banners or flags have been added.

These features were mentioned, but nothing was ever done with them.

Notch and other Mojang Studios employees have frequently joked about adding various features to the game.