자이언트는 Indev에 추가된 현재 사용되지 않는 몹이다. 그것들은 거대한 좀비처럼 보인다. 자이언트들은 행동 AI가 없다, therefore they are unable to walk around. They cannot spawn naturally because the game requires the light level to be both greater than 11 and less than 8 and those conditions cannot be met in vanilla. This makes them impossible to appear through spawners.

The killer bunny is a variant of the rabbit that is hostile to all players and tamed wolves. Its fur is pure white with blood-red eyes that are horizontal, compared to a normal rabbit's vertical eyes.

If the killer bunny finds any player within a 16-block radius, it will hop very quickly towards the player, much faster than a normal rabbit. It moves in a style similar to that of a spider. Once it closes in, it will lunge at the player, dealing a fair amount of damage. If the player strikes at the killer bunny, it will run away for a brief moment, then return to lunging at the player. Killer rabbits are also immune to the Thorns enchantment.

If it cannot find a player, the killer bunny will actively seek out and attack any wolves as well, including tamed wolves. These wolves will, in turn, attack the killer bunny, leading to a vicious fight.

On peaceful difficulty, the killer bunny will not despawn, despite its hostile nature. It will still attack wolves and tamed wolves.

The killer bunny can only be spawned with the /summon rabbit ~ ~ ~ {RabbitType:99} command.

Zombie horses are a variant of horses that were added in Java Edition 1.6.1, along with normal and skeleton horses. There is a zombie horse spawn egg available only in creative, but they remain unused in survival.

In addition to spawn eggs, zombie horses can be spawned with the /summon zombie_horse command.

Various status effects remain unused in the game. They can be obtained using /effect or potion NBT data, but have no way of being obtained other than that.

During the Java Edition 1.6.1 snapshots, the health boost status effect was added. It boosted the player's hearts for a temporary time. It could be obtained from eating a golden apple.

In the next main snapshot, golden apples give the player absorption instead of health boost, but the effect was still left in the game.

In Java Edition 1.9 and Java edition 1.14. developers gave the Health Boost effect a new texture, despite the fact that it is still not in use.

The following biomes remain unused since 13w36a and 18w08b. While they do not naturally generate in default worlds, they can be accessed using the Buffet world type.

Loops were unused sounds, found in the game files, and were possibly meant for when the player is in a specific type of location (i.e., in caves, forests, the ocean and beside a waterfall).

They were found in .minecraft/resources/sound/loops/, and could be converted to reveal four loops, of birds chirping, cave chimes, ocean and waterfall noises.

However, the "Breath" sound is still usable by running /playsound minecraft:entity.player.breath ambient @a in chat and command blocks.

In the particles sheet, there is an angry villager head which remains unused.

150px
파일:Arrowandpurplearrow.png
The arrow and the purple arrow beside each other, in that respective order.

Purple arrows were shot by skeletons in Survival Test and acted the same as regular arrows, but could not be picked up. The purple arrow used a texture on the same sheet as the normal arrows, but the texture is not currently in use.

In Java Edition 1.9, a new texture was added for arrows, causing the original arrow texture, including the purple arrows to be entirely unused.틀:Needs testing 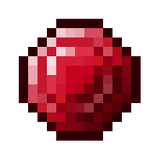 On May 21, 2012, Jeb released a screenshot of himself testing the trading system. At this time, what would become emerald ore in Java Edition 1.3.1 was ruby ore. The previous ruby texture remains in the ruby.png file. It is unknown if the texture will ever be used. Dinnerbone stated in a forum post[1] that they went with emeralds instead of rubies at the last minute because he is colorblind and he had a hard time spotting the difference between ruby ore and redstone ore.
The names "Ruby Ore" and "Ruby" were still in the .lang files, but they were removed.

The villager speech bubble is an image that was added along with the villager.png file in the jar when the trading system was added. It showed a trade, where raw chicken could be sold to villagers for another raw chicken. Both raw chickens have the old texture. During an interview about villagers, Jeb offered a possible explanation: "We did some experiments with thoughts bubbles, but it didn't look good. So in the end, after I’d been lead on Minecraft for a year, we just decided to add an interface instead." [2]

The texture has been partially overwritten by the selection arrows.

These textures were added in Java Edition 1.9 snapshot 15w31a. They are used by the developers, maybe for making block models.

Texture from the minecart model is only visible in rare occasions. The texture appears to be dirt, which is an artifact of when the minecart used to act like a portable chest. The "dirt" level used to raise when items were put into it. The texture still appears inside minecarts, but it's blocked by a different texture. It can only be seen in spectator mode.

The Evoker, vindicator and witch are hostile mobs based off the Villagers, and they have an unused hood texture.

Evoker hood can be seen on Meet the evoker and the witch hood on 18w50a.

banner_base and banner_overlay item textures exist but are unused, suggesting that banners may have had a two-step crafting process once, or it was once going to use an item model instead of the original entity model. (May be used for pre-existing small sprites of coloured banners, like they'd colour the overlay seperately).

Some extra icons for maps. The white and green arrows are the only ones used normally, though the colored arrows are used for multiplayer in the console versions.

Squares labeled "SEL" and "UN SEL" (likely "SELECTED" and "UNSELECTED") can be found in "textures\gui\container\creative_inventory\tabs.png". Purpose unknown, though they could possibly be used as a template for the selected tabs and unselected tabs with the rest of tabs.png.

Skeletons without bows can be spawned with commands and attack melee.